I had a special day with just my older son last Tuesday – really rare and so treasured. It was half term (just FYI those of you whose tinies aren’t yet at school and hey, don’t worry that all the toddler activities stop. Trust me, just enjoy having nowhere to be!).

We went to Bedgebury National Pinetum + Forest with friends and their older boy to bike the Family Bike Trail, stare up at sky scraping trees and play on inventive, challenging wooden playgrounds dotted along the way.

Bedgebury is home to the National Pinetum, where the finest collection of conifers in the world live. You’re not allowed to cycle in that part, but there are apparently great walking trails.

In the ‘Forest‘ of it’s title are the biking trails. We did the Family Bike Trail (marked blue) which is pretty easy going, with some steep-ish uphill sections that we just walked. There are markers along the way but we still needed a map (procure from Quench or the Visitor Centre).

For this, ensure you bring a big bag of giant chocolate buttons or similar. You are welcome to use my incentive scheme of ‘top chocolate’ – a button for anyone who reaches a hill’s summit without whinging. I cannot lay claim to calling what I’m sure we all do a version of from time to time, living in a town of hills as we do, ‘top chocolate’. It was invented by my Uncle Sven, who got me to the top of a mountain that sits on the lake in Norway where he lives when I was seven.

There are of course lots of downhill bits too and my son took these on with fearless whooping glory, trying to pedal furiously to go faster, despite being in a zippy, whooshing freewheel. We all had mud sprayed up our backs by the trail’s end, which the boys loved.

The trail took probably an hour and a half to get round, with some stopping for a snack and a whinge. It was brilliant though – freeing and fresh air-filled.

We ended at the large playground, where there is an ice cream van, a big sandy-floored area for playing and some picnic tables. Through the trees back towards parts of the Family Bike Trail are further, smaller playgrounds – they throw up tunnels, a giant snail, logs hung from ropes to rock on in a group, mini adventure/assault courses. These playgrounds are all part of the separate Play Trail.

The Play Trail is a separate entity to the Family Bike Trail, but the two converge at several points (namely the playgrounds). It can be walked, so you don’t have to come to Bedgebury with biking in mind. It covers two kilometres and passes 10 different climbing frames for inventive play – some of which we walked to from the large playground at the end of the FBT.

There’s also Go Ape here, which has relatively recently opened something called Tree Top Junior for children over six or those over a certain height (I think a metre, but check) and accompanied by an adult. We refrained as it was £17 per person for an hour.

Besides, I had already had to hire a mountain bike from Quench in the carpark, where prices start at £10 for an hour, rising to £25 for anything over four hours. Helmets are included.

Quench also does kid tandems (where they ride behind you), adult tandems, baby carriages and baby seats – I think the latter are free of charge, but again, do check. (And another plus – fathers reading this, feel free to look away now – the boys that work in there are kind of hot).

There are other trails to ride – red ones for hardened mountain bikers, which my friend’s husband (also my friend) went off and did for half an hour while we rode the final piece of the Family Biking Trail.

And then there are the wooded areas all around you, which the children can scamper through and get (slightly) lost in.

Because the trails are very wide and sandy, the whole place feels kind of North American.

Bedgebury is very well put together. Because of the work I do, I’m a sucker for good branding, and it’s very clear and clean here. The Pineatery Café at the start (and, I guess, at the end!) also has a North American vibe, and is sat beside a duck pond.

I would DEFINITELY bring a picnic here though, because there isn’t food dotted along the trails. It’s just the ice cream van and the café.

Near the café is also a Visitor Centre bulging with leaflets about things to do – the Forestry Commission is celebrating 15 years of The Gruffalo and there’s a special trail at Bedgebury open until September (which we didn’t do). They also have several things happening in the summer holidays.

The drawback of Bedgebury is that it is exactly one hour’s drive away from Lewes. Set your satnav to take you through Heathfield. It’s a beautiful, beautiful drive and I highly recommend you set off from Lewes really early and make a whole day of it. It is so worth it. Avoid Tunbridge Wells at ALL COSTS.

The plus of Bedgebury is that it costs £9.50 to park for the day and that’s all you pay in terms of entrance fees. It’ modern, efficient and convenient, so you’re directed to a parking spot and then you leave your car and pay via a ticketless machine that takes card or cash before you go home.

Oh, also, you can take your doggie. Just do the right thing vis-à-vis their poo, yeah?

N.B. Some of the photos in this post are from when we went last summer, so my smaller one is in them and is much smaller than he is now.

Double N.B. This is a place I cannot recommend enough. 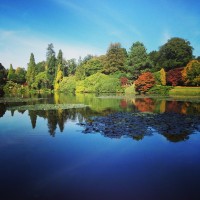