Scout & Co is an online destination for beautiful, design-led products for both kids and adults. It furnishes the under sixes with very tasty threads, and stylish toys that are the antithesis of our disposable culture. It’s run by three mothers, who have six children under the age of five between them (lawks!) and one of them, Nicky, lives here in Lewes.

Nicky contacted me a while back on Twitter for some family-friendly recommends for a weekend in Lewes as she was coming here from London to scout around the town with her co (see what I did there) and decide whether it was for her. She was staying in an Airbnb property and – blow me down – we only worked out it was my best friend’s place!

So a few months later, Nicky got in touch and said my recommends went down well – *blushes* – and her weekend here had made her decide to move. So she and her brood are now new-ish kids in town, but she has continued to run Scout & Co with her London-based business partners (really her friends).

The girls have offered Little Lewes readers a special discount to use in the online store between now and 11th December – it’s 15%! Just enter the code LL15 at checkout to get your discount*. There’s a dedicated Christmas shop currently on the site, handily broken down into Christmas presents, stocking fillers under £20 and wrap and cards. Go forth!

Want to know what I’d go for? Probably not, but here’s my little edit  all the same.

For my seven-year-old son: Lomography Clearaction Sampler, £29 (£24.65 with discount)

OH-EM-GEE my son would have a GAS with this! It’s made for goofballs and requires no focus or concentration. Plus the casing is clear so it looks really cool. PLUS it’s not an iPhone, so it will soon become an historical artefact. Double – no triple – cool!

The little toad is still as picky as ever, despite my resolution to be better with this – and my best efforts. My friend Sarah Dyer suggested I strip things back and try him with a partitioned plate. She did this with her son Stanley when he was weaning, but with a paint palette dish. I love this one by Design Letters, a company that’s applying the hand-drawn typography created by Arne Jacobsen, über icon of the design world, to everyday things. Being half Danish, I am especially partial to this, and will admit we already have a few pieces. Love that it can be used as a desk tidy too. Lots to match it if the heart desires – from cups to cutlery to calendars.

For my seven-year-old sometimes-daugther: A Mini Penny Panda Necklace, £18 (£15.30 with discount)

It’s a panda and a pompom. On a necklace. I don’t have to explain this one really, do I.

For my two-year-old sometimes-baby (who you’ll notice is really a toddler): Beau Loves Black and Gold Dot Davenport Pants, £32 (£27.20 with discount)

She’s quite nails and she doesn’t suffer fools, so although she looks as if butter wouldn’t melt, I think my sometimes-baby (toddler) harbours a yearning to rock black. The gold dots just kid it up a bit and make it festive. Very Wednesday-Addams-does-the-season-of-cheer.

Thanks to my Danish roots we are very into this season and its hygge. We have a black leather sofa and we have monochrome Marimekko cushions on it (our 10th anniversary present to ourselves/each other from a legendary trip to Helsinki). So this blanket would look fetching draped over him as we settle in for this new season of The Bridge (aren’t you missing Martin? We just love his tortured soul juxtaposed with that smile).

If I could afford it, this glowy little friend would be in his room for Christmas.

A baby tee that tells the world your parents have made it through the worst of it. The slant of the numeral gives it rockstar attitude.

This is actually a change bag, and I’m admittedly now without babies, but I DO have a small being newly in my life (puppy) who would fit nicely in that front pouch. This bag is designed to see you well beyond your baby years and be a bag-bag, and I love it because it DOESN’T LOOK LIKE A NAPPY BAG! Love the blue, love the slightly punky flowers, love the gold zips, love the pockets, love the practical. I mentioned this before, but Tiba + Marl are one of the reasons motherhood is becoming cool.

Disclosure: Nicky at Scout & Co contacted me to ask whether I’d be interested in writing a post through which the girls could offer Little Lewes’s readers a 15% discount on the site. She gave me no other brief, so this shopping edit is all my own words and own ideas.

Scout & Co has kindly agreed to donate £30 to The UN Refugee Agency, which will be receiving donations throughout December via Little Lewes. To find out more about that, read this.

*Discount on all items on the Scout & Co site EXCEPT those by Mint Rhapsody and Twig Creative. 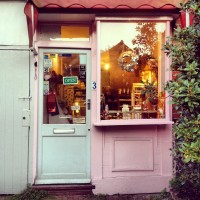