For two years now, we’ve been meaning to go away for a weekend with two other families who also each have two young kids. This year it actually became possible and our ‘trip’ (if you can call it that!) happened the weekend before last. Just as we were mulling over where to go, a flier for a new camping experience just two miles from Lewes came through the door. Mount Harry is what you might call ‘glamping’ but that’s the only time I’ll use the word in this post and I’m personally not that keen on it.

What we’ll call it is ‘camping with comfort’. Or probably better, ‘camping with a kitchen’. Because what I’d say is that at Mount Harry, where the sleeping (or not sleeping in our case!) happens in one of eight bell tents, the camping part is can be as uncomfortable as camping often is – but it’s made so much better by the addition of yurts that act as a kitchen and a living room. These sit in a pretty little wood alongside a huge BBQ and long tables and benches for communal suppers.

On the site is a DIY shower, for which you heat water in sort of outdoor stove and then, via a pulley system, fill a bucket with a shower head attached to it. While not exactly convenient, I’m telling you you haven’t had a relaxing shower until you’ve done it under open skies. Given that camping makes you literally itch for a wash, it’s all the more rewarding when you work a little harder for it than usual. There’s also a pour-on-two-cups-of-sawdust loo in it’s own little cabin.

When we were at Mount Harry, the ‘living room’ yurt became more than just a comfort – it became a blessing when a thunderous rain storm hit us on the Saturday morning. Drawing, reading, game playing all took place in comfort and dry in this candle-filled space, where the kids spent any time they weren’t roaming in the meadows and woods making dens out of mountains of cushions.

Being so close, at least one person in every family headed back to Lewes for one reason or another. And it meant we also had a supermarket shop delivered just as we all arrived straight from school on Friday. Although we only really had to bring bedding and food, our cars were still packed to the rafters with games and bikes and essentials – as one dad said ‘it doesn’t matter whether you’re going camping for two weeks 200 miles away, or for two nights two miles away, you still need crap loads of stuff’.

The site at Mount Harry, which has the most stunning views across the weald, is taken whole hog, so you have exclusive use of a trim, spacious lawn, beautiful woods and two grassy meadows. The children can run free (within reason – I should add that the woods include several steep drops into ivy-covered ditches and although fairly large, end on a main road). There is also a hammock, surrounded by a carpet of wild orchids and strawberries. It is very idyllic.

For this reason it is not cheap and would be booked in most cases for a special weekend or event or saved-for holiday. You take Mount Harry for the weekend – Friday 4pm to Sunday 6pm – and prices are worked out according to how many you are and the season. Dan, who runs the place, kindly offered us a discount in return for this blog post, which I gratefully accepted.

The bikes were undoubtedly the best thing we all brought with us and the kids spent both days cycling through the long grass and playing hide and seek (easy, you just lie down anywhere and no one can see you). We had large BBQs each evening before the children collapsed and the adults sat around the campfire playing the hilariously hideous Cards Against Humanity (tagline: ‘A party game for horrible people’. Turns out we’re all ghastly).

Overall, we all loved Mount Harry. At least three children cried when we left, and I have reports that one of was still in tears at bedtime. We all came back EXHAUSTED, but rested. How is that possible? I don’t know, but it is.

Disclosure: I approached Dan at Mount Harry about reviewing the experience he offers in return for a discount on the price of a two-night weekend for three families of four. No other financial compensation was offered or accepted. 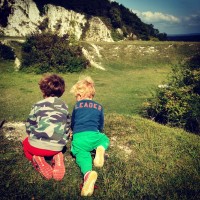