Well another year has zipped by and Little Lewes is two years old as of yesterday. It launched with this first little post, and it belatedly celebrated it’s first birthday with this one.

I’ve been more on the ball this year, and more aware of the date as I thought it would be a good moment to launch the new look, theme and functionality for Little Lewes.

The old theme was always meant to be temporary. It was called Adelle by BluChic and I customised it myself when I knew almost nothing about blogging content management systems, it was that easy. I pared it back, made it friendly, but not too girly by using grey and blue. I’ve never wanted Little Lewes only to be for mothers – it’s for dads, grandparents, carers too. I had nice comments about it, so I kept it and think it really worked for Little Lewes while I was using it.

But from day one I badgered my husband to create a new logo for me. Shows the effectiveness of nagging – it’s taken two years (and even then only because he finally said: “Stop talking to me about this while we’re giving the kids a bath, let’s schedule in some actual work time for it!”). I sent him a meeting invitation and two weeks I briefed him in his studio (well, it was pretty muddled) and then watched over his shoulder as he drew out, tweaked and coloured what you see now.

My husband hand-draws all his work, scanning it in to colour it afterwards. There were many iterations of what you see now – many. We nearly killed each other in the process (or rather, he nearly killed me). But I wanted something playful to reflect the blog’s kid-centric theme, but that has design credentials – that can fit with the lifestyle, design, food, travel, and thought-lead posts that Little Lewes sometimes features. I didn’t want it to look like a mummy blog or a kids craft blog – because it’s neither. I hoped it would have a charm to it and be nostalgic like the pictures are, while also being both a little grown up and stripped back, with a nod to mid-century design and letterforms.

I found the new theme on creativemarket.com by Googling ‘simple WordPress themes’. I totally chose it because I wanted a little Instagram gallery in the side bar! And because it’s plain and functions like the old site (I looked at and loved this for ages, but thought it would be a head scramble for you and I to get used to – and we’re all tired aren’t we).

Also now I can do slide shows and tiled galleries (posh!), which hopefully shorten my posts, as I DO like a lot of pictures… Ever-patient front-end developer Barry Bloye made the many little tweaks I wanted and am sure that, like my husband, he wants to throttle me.

Anyway, what do you think? I hope you like it. Don’t you think my fella’s done a great job? I think he nailed it – I’m super into it. I like that the S reminds me of a corkscrew rainbow slide. I couldn’t live with those damn chevrons any longer!

Tell us what you think, do?

+++ Why not join our adventures by hitting ‘subscribe’ (in the side bar on desktop, or way down the bottom on mobile). This’ll mean we hit your inbox up whenever new posts go live +++ 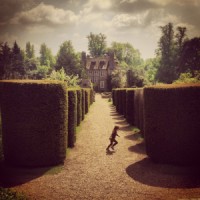